Shimco, a world-wide leader in the manufacture of precision parts and gap management solutions, announced today the inauguration of its new headquarters was held at their future 25,000 square foot facility site in Cambridge, Ontario. Relocation of Shimco’s current headquarters in Markham, Ontario to Cambridge is planned for December 2015. 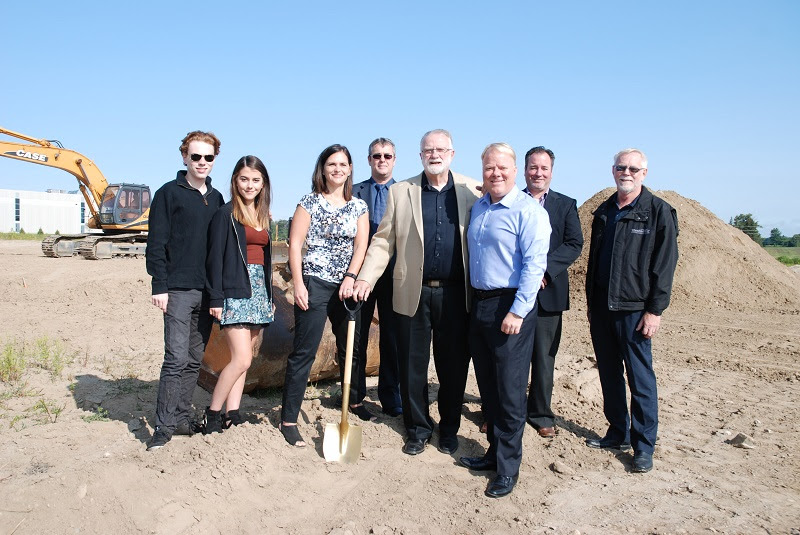 In attendance at the ground-breaking ceremony in the Boxwood business subdivision in north Cambridge was the Mayor of Cambridge, Doug Craig; Steven Fairweather, Chief Financial Officer and City Treasurer, City of Cambridge; James Goodram, Director of Economic Development, City of Cambridge; Brian Butcher, VP of Operations and Communications, Cambridge Chamber of Commerce; Peter Voss, President, CEO and owner of Shimco; his wife Jennifer Voss, Director of Shimco and their two children, Benjamin and Hannah Voss.

The new state-of-the-art manufacturing facility will incorporate increased automation, new manufacturing capabilities and the latest lean manufacturing principles. Shimco also plans to collaborate with local educational institutions, equipment manufacturers and its customers to create a ‘centre of excellence’ to commercialize leading edge manufacturing and processing technologies. An additional 15,000 square foot expansion is already in the planning stage to start construction in 2016, which will incorporate surface treatment and testing, allowing the company to offer end-to-end customized solutions to its international customer base.

During the relocation period, parallel manufacturing is planned for the current manufacturing site in Markham, Ontario and the new Cambridge location to ensure no interruption in deliveries to customers.

Voss comments: “It was an honour to be surrounded by representatives from the City of Cambridge, Cambridge’s Chamber of Commerce, but particularly my family, without whose never-ending support none of this would have been possible. As a resident of Cambridge, it is especially momentous to establish Shimco here, alongside other leading aerospace manufacturers, and to create new jobs in a community known for advanced manufacturing. The City of Cambridge has been extremely accommodating during this process and I thank them for their support. Our customers have given me very positive feedback on our move, and we are already seeing new opportunities with existing and new customers because of the significantly improved capabilities planned for the new facility. We look forward to the construction of the new building in the coming months and our move to Cambridge at the end of this year.”