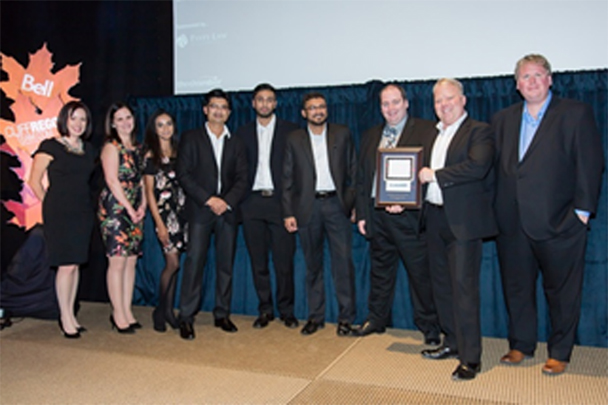 Shimco was recently named “New Venture of the Year” by the Cambridge Chamber of Commerce during their 2016 Business Excellence Awards ceremony. Many members of the Shimco team attended the event and were delighted to receive the award and recognition among their community peers.

This award was especially meaningful to Peter Voss, President and CEO of Shimco as it is from the community he and his family reside in and recognizes Shimco’s evolvement especially since its move to Cambridge:

“It is an honour for Shimco to be recognized by the Cambridge Chamber of Commerce with their prestigious Business Excellence Award for New Venture of the Year. Since our move to Cambridge, Shimco has invested heavily in new equipment and improvements to our operating environment, implementing improved technology and workflow design, resulting in planned spare capacity. As a result, we have significantly decreased our lead-times, hitting our target of 100% on-time-deliveries. We are now able to handle Airplane-On-Ground and rush orders in as little as 24 hours. The entire Shimco team can take pride in our new facility and in this award, and the merit it represents to the Cambridge Chamber of Commerce and our community.”

Award winners of the Cambridge Chamber of Commerce Business Excellence Awards are businesses or individuals that have demonstrated a significant and sustained commitment to positive business development, economic growth and diversity within the city of Cambridge. The New Venture of the Year award is presented to a new or existing business that through innovation of design and technology has significantly improved the esthetics and functionality of their operating environment.

Greg Durocher, President & CEO of the Cambridge Chamber of Commerce commented: “The Chamber is proud of all its members, in a community ranked 20th in size and 2nd for number of members in the province of Ontario. We have many businesses who began in Cambridge, and businesses who have chosen to be here. Shimco, our recent winner for New Venture of the Year is one of those businesses who chose to relocate to Cambridge.

“Shimco is one of those model companies that deserve recognition as an SME in a field where most are industry giants. Shimco’s talent, expertise and commitment is leading the pack in next-generation technology for the aerospace industry. We are proud of their champion mentality and are extremely pleased Shimco chose Cambridge as its new home.”